The social scheming of secret cinema

Secret Cinema - TELL NO ONE

The magic lies in the organisers’ ability to engage their niche and rapidly expanding market, resulting in sell-out shows despite the customers not actually knowing what they are buying tickets for and having only the faintest clues as to what is in store for them.

The latest event has been one of the most secretive performances of them all. With cryptic images reflecting glimmers of cold war era, Russia, sex, secrets and deception - always accompanied with the strict instructions - TELL NO ONE.

Every Secret Cinema social media platform - Facebook, Twitter and Instagram - was peppered with clues, event posters and news but the real magic happened away from the prying eyes of the general public. After purchasing tickets to the event (that you knew nothing about when you parted with your hard earned £60), the ticket holders were invited to join a secret Facebook event.

The Facebook event itself was the perfect platform for ticket holders to engage with each other - trying to guess the film, answering questions, swapping costume tips and offering advice from past Secret Cinema experiences.

“The whole purpose of SC is not knowing the film before the event, it will spoil the evening (in my opinion), it is all about the experience before the film on site... including FaceBook and and the web before. Chances are you know the film or already watched it. I am going this Saturday and I am so excited about it... this is my fourth SC.” - Adj Adjorama, Facebook.

Any communication from Secret Cinema is perfectly in character - addressing the “Operatives”, dropping hints, tips and instructions for the missions to come.The mood of the event is built within the online platforms, though no details of the film are released. The clips so far have delivered a sense of foreboding and impending doom, black, white and grainy, flashes of war memorabilia and a nuclear attack seems quite likely - cold war era seems almost certain.

The operative instructions themselves are held on a D.O.C.S database including the clothing instructions for your allocated character. A great topic of conversation on the Facebook event page as the operatives spend weeks mulling over the tiniest details. 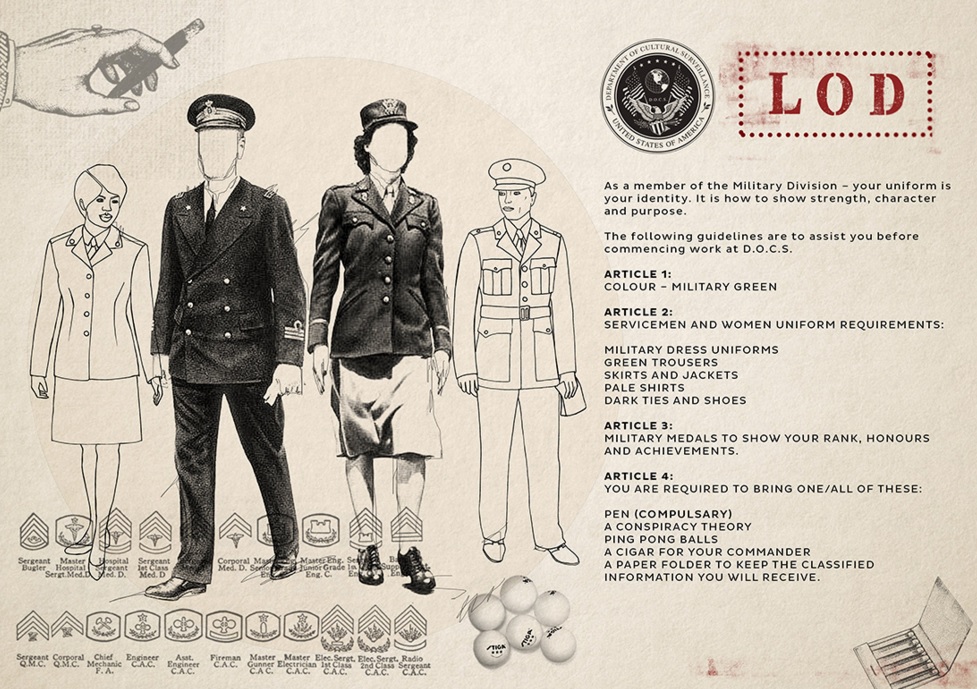 Personally I am surprised there hasn’t been more debate around the ping pong balls!

The clues come in all formats.. from Nina Simone songs to Charlie Chaplin clips and a huge collection of the most cryptic GIFs. 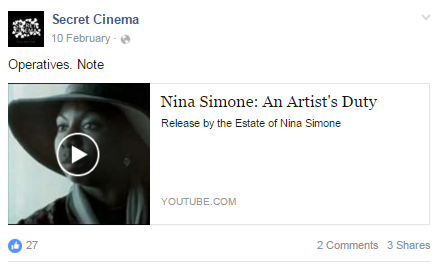 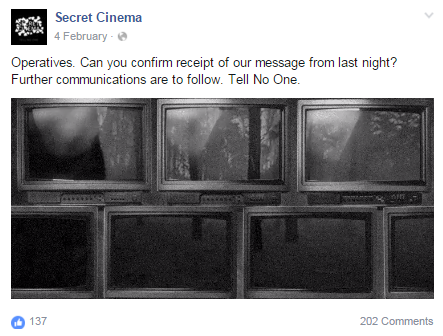 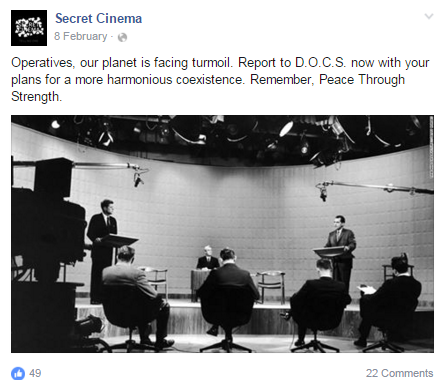 The organisers engage the audience in the experience from the moment the ticket is purchased to the performance and even requesting “eye witness accounts” for The Washington Telegraph Newspaper. The article posted are a unique blurr of user generated content referencing acreepy mixture of past, present and imagined events.

Secret Cinema use an exquisite level of social media layering to really engage the audience at every opportunity allowing superfans to draw other operatives into the experience. The use of events, fictional newspapers and operative systems makes the basic Facebook, Twitter and Instagram accounts seem like social media child’s play. They have taken community management to explosive levels… only to let it die...

Eventually, the event slips from the Facebook searches and you have to dig even deeper to find your once vibrant community.

With the last events looming the posts are turning from anticipation and excitement to the less cryptic costume and ticket exchange. Tell No One still features highly on the agenda; so far the community has remained loyal to the Secret Cinema mission, the title of the film is still under wraps.

The ever-growing silence is deafening, but each and every person knows how to get their Secret Cinema community fix.. the next event has been announced with a fewer whispers and a whole lot of fear. Time to put our Walking Dead strategies into play - The Days Are Numbered (zombies are coming).