While loved up couples are declaring their devotion to each other this Valentine’s Day, a simple video-sharing website is quietly celebrating 12 years since its launch. YouTube is just a year behind social media giants Facebook, who recently turned 13. We wouldn’t want YouTube’s special day to be forgotten, so we are celebrating by taking a look back at how it all began for one of the world's most popular sites. 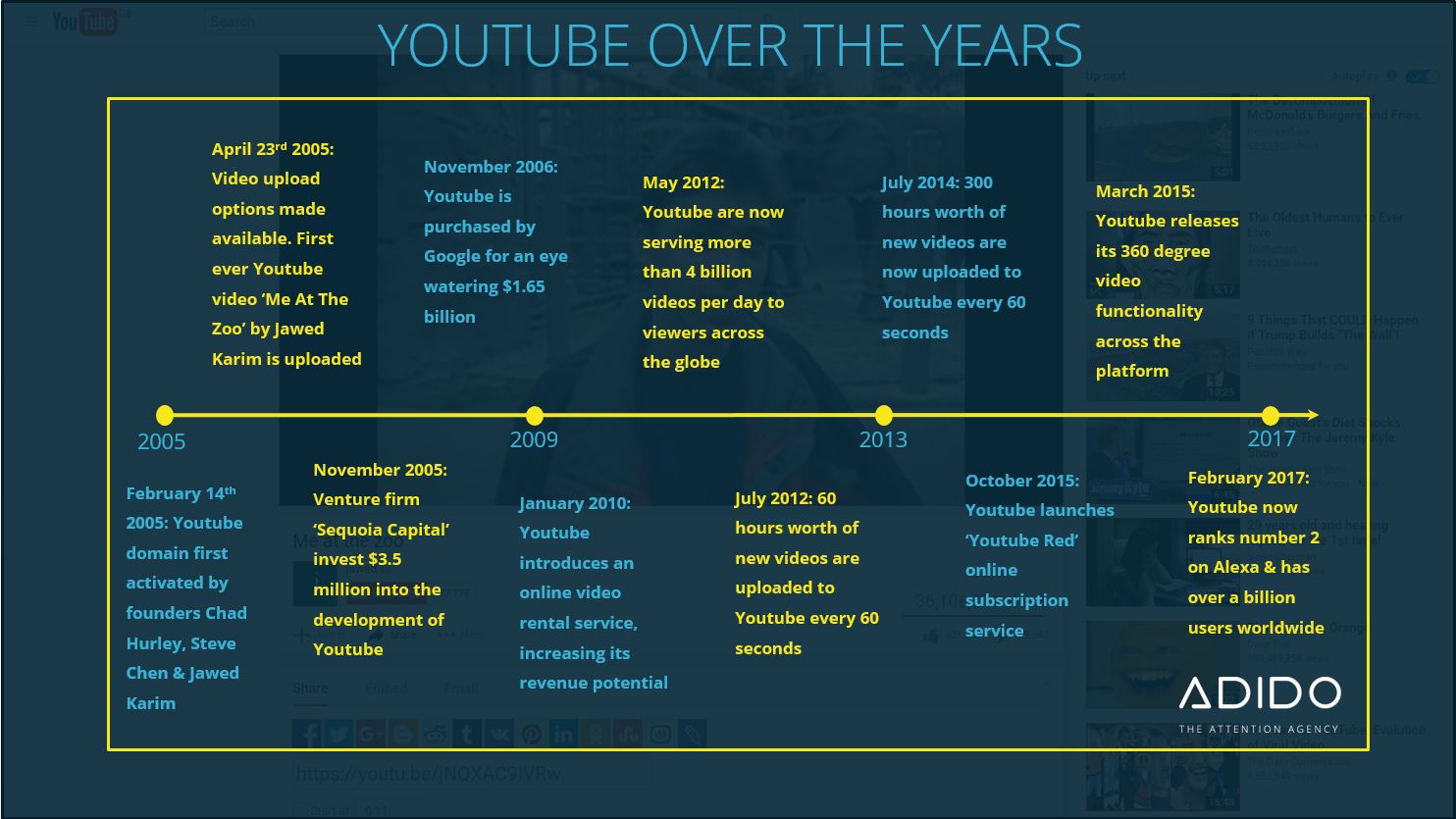 When the founders of YouTube, Chad Hurley, Steve Chen and Jawed Karim, first activated the domain www.youtube.com on 14th February 2005, they may not have realised just what a massive success the site would be. With an office based in a garage, the first video was uploaded on April 23rd 2005, which surprisingly has only been viewed a mere (mere in terms of YouTube views) 36 million times so far.

By 2006, YouTube was announced as one of the fastest growing websites on the web, averaging around 20 million visitors per month. Google certainly took notice and by November 2006 they had purchased YouTube for a cool $1.65 billion. The growth from then on was immense and by constantly adapting and innovating their service to suit user needs and finding new ways to monetise the site, YouTube’s success doesn’t seem to be coming to an end any time soon.

YouTube isn’t a company to sit still; they have been constantly innovating their service since the beginning. Here are just a few of YouTube’s latest innovations:

With the introduction of 360 degree videos, the opportunity for VR compatibility was too much for YouTube to resist. Ever wanted to get up close and personal with a herd of elephants? Or wondered what it might be like to fly over Dubai in a wingsuit? Now you can find out using the YouTube VR App, currently compatible with the Daydream View headset. Users can find their favourite VR videos using voice search and have a personalised experience when signed in to their own account. This is the YouTube of the future!

With competition to become a YouTube sensation being so fierce these days, YouTube knew it needed to do something in order to keep up-and-coming video creators motivated to keep trying. That is why they have introduced the new Trending Tab in the navigation bar where video creators who are on the rise, with 1000 followers or more, will start to appear. This gives everyone a chance to get noticed and will most likely push people to generate more and more content on YouTube!

Offline viewing is rolling out

Users have been desperate for YouTube to include the capability to download videos and view offline for a while now, and it looks like the time has come! Although this update has only rolled out in India for now, the ‘YouTube Go’ app will allow users to download videos and watch them later on when they don’t have a data connection. The app will massively reduce the size of all videos, meaning they won’t be available in HD quality. Hopefully this update will hit the UK soon and will be eagerly welcomed by commuters across the country.

It's suprising to see how long it's taken YouTube to get on board with user live streaming, but it looks like they are finally there! Obviously there has already been live streaming capabilities for big events such as The Royal Wedding in 2011, but now individual users will be able to live stream to their followers. At the moment, you need to have at least 10,000 subscribers to unlock the live streaming capabilities, but YouTube hinted at it being rolled out further in their recent blog where they said:

“So what’s next? The roll out of our new mobile live streaming feature to every creator with more than 10,000 subscribers (the rest of you will have it soon!).”

We have a lot to thank YouTube for, whether it be for the entertainment they provide us, the educational videos which have helped us sharpen our skills or the opportunities it has presented people to get their voice heard by the masses. So don’t forget to thank YouTube this Valentine’s Day and you never know, you might be the next viral sensation!