On 9th February 2020 we noticed some strange goings on with Google's algorithm. We had seen ranking drops across nearly all of our clients! As an SEO, this is enough to give you a heart attack, so THANKS FOR THAT GOOGLE! But, fortunately, after a few days, this algorithm update was seemingly reversed, as most of our clients rankings returned back to normal, with some even seeing an increase since the update.

Of course, Google has been as helpful as ever in giving us insight into the update, and it is (sort of) unconfirmed because this was their response to SEO's asking questions: 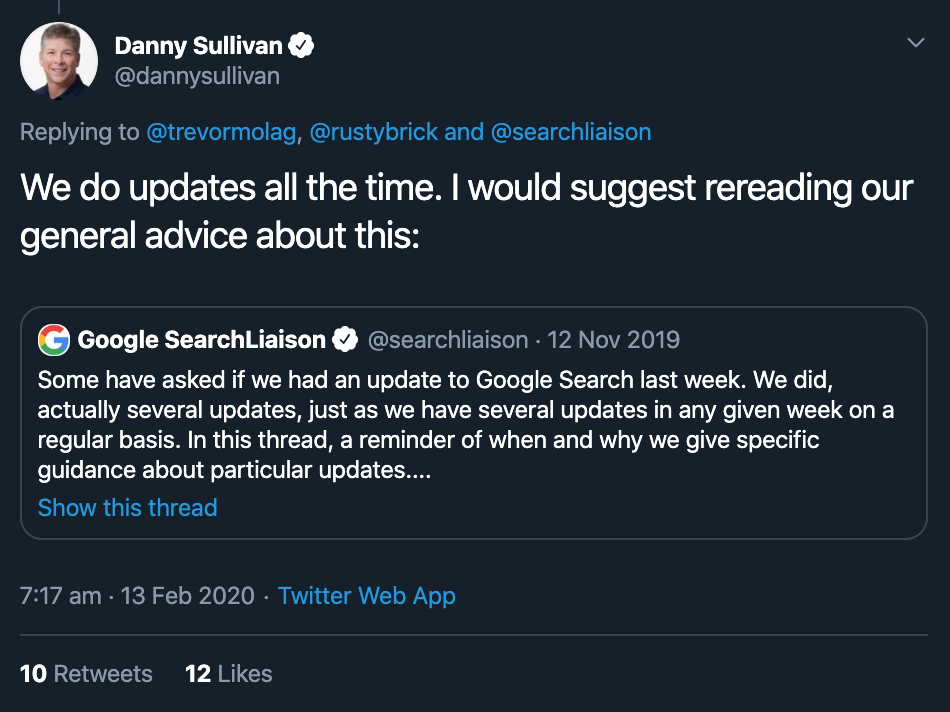 To be fair to Google, their algorithm has a hell of a lot to contend with, but ranking patterns like the ones we have seen across multiple industries is alarming, and indicates that perhaps this update was miscalculated, or had a bug etc. because it seems to have treated all websites / industries the same (I am generalising from the data I have a bit here, but you'll see what I mean in the many, many graphs below).

Below are a few examples of the ranking patterns we saw throughout February, taken from a variety of clients in different industries. This data is taken from SEM Rush and tracks the average ranking position for ALL of the keywords we track for each client. We have removed client names for data privacy.

Our short term lender client below, compared to two of their immediate competitors, saw similar ranking patterns around February 9th.

Our client, a retirement home developer, shown below, compared to their immediate competitor, saw similar ranking patterns around February 9th.

Our client, an ecommerce washroom refurbishment business, shown below, saw similar ranking patterns around February 9th. While not as severe as other clients, the same patterns are seen at the same times.

How much this algorithm update impacts a website’s traffic and conversions depends on two factors; the keywords which saw a decrease in ranking and how long they took to recover. To explain more, we will look at two clients; the short term loans company and the retirement homes business.

The keywords which saw a decrease in ranking

One factor which determines whether or not an algorithm update will actually hurt a website’s traffic and conversions is which keywords actually saw a decrease. If a website has a high search volume keyword ranking in position 1 and then loses this ranking during an algorithm update, this is going to have a far bigger impact than a website which loses rankings for low search volume keywords which it previously ranked on page 6 for.

Looking at our short term loans client, the majority of their keyword loss was for keywords which ranked in positions 21 – 100, so they possibly were not getting much traffic from these keywords anyway:

For our retirement homes client, the majority of their keyword loss came from keywords which ranked position 4 – 10, therefore they are much more likely to lose traffic:

How long they took to recover

The amount of time it takes for the website to recover also plays a big part in the overall impact to the website. For our short term loans client, they lost their rankings on the 9th February, but had fully recovered by the 11th February, which is shown is SEMRush’s ‘estimated traffic’ report, which estimates the amount of traffic a website is getting from the tracked keywords based on their ranking position’s average click through rate and the monthly search volume for the keyword:

This indicates that the short term loans website will have recovered quite quickly, as their traffic driving keywords recovered in a couple of days.

For the retirement homes website, recovery of traffic driving keywords took longer, which has an impact on their estimated traffic levels from these keywords:

They lost their rankings on the 9th February and although their average rank was back to what it was before the algorithm update on 23rd February, the website didn’t recover until 27th February because the keywords with higher search volumes still hadn’t recovered yet, as indicated in their SEMRush ‘estimated traffic’ report:

Now, of course correlation doesn't equal causation, and there are many other factors at play here, but when we look at non-brand organic traffic to both websites between 9th February and 27th February compared to the previous period of 19th January to 6th February, the short term loans website did not see a decrease in organic traffic, and actually saw an 18% increase in sessions, while the retirement homes website which took longer to recover and had higher ranking keywords impacted, saw a 6% decrease in sessions.

As you can see, there is an awful lot to analyse when looking at algorithm updates, and it shows us just how much responsibility Google has to keep its algorithm in check, because it can have such an instant impact on website performance. You can find out more about the February 2020 unconfirmed Google Algorithm Update on SEO Roundtable here and here.

What is good ROI from a digital marketing budget?

We are often asked 'what ROI should I expect from my digital marketing budget?' So, in this blog, we take a deep dive to try and find the answer!

For your agency to produce the best possible results for your work, you're going to need to supply them with a brief detailing all the necessary information for that campaign.

Adapting your marketing in a crisis: Forget the strategy, focus on tactics

We are living through times that are as unprecedented as they are uncertain. Needless to say that for marketers, the term 'business as usual' simply no longer cuts it as the world finds itself in the grip of the COVID-19 pandemic.