Over the past four years, our head of Brand Communications, Andrew Moore has challenged me to put together a talk worthy of a conference audience. The Attention Summit this year was no exception and in my fairly new role as Digital Strategist the world was my oyster.

Over the last six months I have been drawn to the moment marketing phenomenon which although isn’t a new craze, I do believe this year it is getting its moment in the spotlight (excuse the pun, not intended). Deloitte Digital and WARC in their Digital Toolkit, tipped moment marketing to be the number 1 trend for 2016, so I seem to be in good company.

Many of the examples I shared date back a few years, and if you take the marketing genius of KitKat, you can trace a form of moment marketing back to the 1950s!

But today, moment marketing is defined as the use of data and tech to identify brief opportunities to put the right message in front of the right consumer.

It’s a topic which can cover real-time marketing, dual-screening, personalisation and experiences, all of which on their own could have made for a 25 minute presentation. Spoilt for choice I chose to follow in the footsteps of Google (I’d be a fool not to) and touched upon the following areas:

For the first of three instalments related to my talk on moment marketing I will share the wisdom of macro-moments. My slides can be downloaded here.

Ability to participate in macro-moments

Participating in macro-moments is probably the most renowned type of moment marketing - it’s concerned with the ability to jump on or hijack cultural, social, and/or TV moments for brand exposure. Predominantly in real-time (or at least seemingly so) brands are becoming more adept at understanding the dual-screen behaviour of consumers, and thus cleverly marrying up their brand activity at the right time with the right message.

For those that didn't get the connection, the photo above is when the Adido team co-incided a mini team building session with the launch of the film Batman vs. Superman in cinemas. In all fairness we didn't get the tie-in quite right, but we had fun and raised some money in the process.

Sometimes the brands which do this more successfully are able to achieve more coverage and engagement than the official partners / sponsors.

Did you know Royal Mail was not an official sponsor of the 2012 Olympics?

It was a licensee for the Games, but the official sector sponsor was UPS would you believe. However, the very clever PR driven marketing campaign catapulted its positive coverage far beyond that of any UK or sector-specific sponsor due to the way it capitalised on a macro-moment marketing approach.

Whilst many brands considered how they could officially or unofficially tie-in to the London 2012 fever with advertising and merchandise, Royal Mail overhauled its operational activities as well as its marketing ones. They issued special edition stamps, featuring the UK gold medalist, a day after their event (and three days for the Paralympics) at 500 Post Offices up and down the country (including the winner’s home town). This was extremely significant because the normal lead time for Royal Mail special edition stamps is 24 MONTHS.

The speed at which they provided gold medal winning stamps (and painted postboxes gold) provided them unparalleled social media coverage and was media gold-dust - some of the winners during interviews even commented about their impending appearance on a stamp!

Whilst the whole campaign was stated to have cost around £200,000, Royal Mail have been quoted as having doubled its sales target for gold medal stamps from this activity.

What is refreshing about this case study is that many departments were involved in making this consumer PR campaign a success, and although during the campaign it felt very ‘real-time’ in its approach, there was a significant amount of planning done, up to a year in advance of the Games. The lesson to learn here is never under-estimate the power of planning for a moment marketing approach.

Sometimes the simplest executions are also the best

In 2012, Red Bull signed up Austrian daredevil Felix Baumgartner for a record breaking skydive from the stratosphere, more than 20 miles above the surface of the earth.

It would make him the first person to break the speed of sound in a freefall, but Felix had to postpone the jump several times due to bad weather. As suspense grew online, KitKat decided to offer Felix some moral support with a humorous Facebook post:

A year later, when a power outage at the Super Bowl caused some lights to go out for 34 minutes, Oreo jumped on the cultural moment by tweeting the ad:

Power out? No problem. 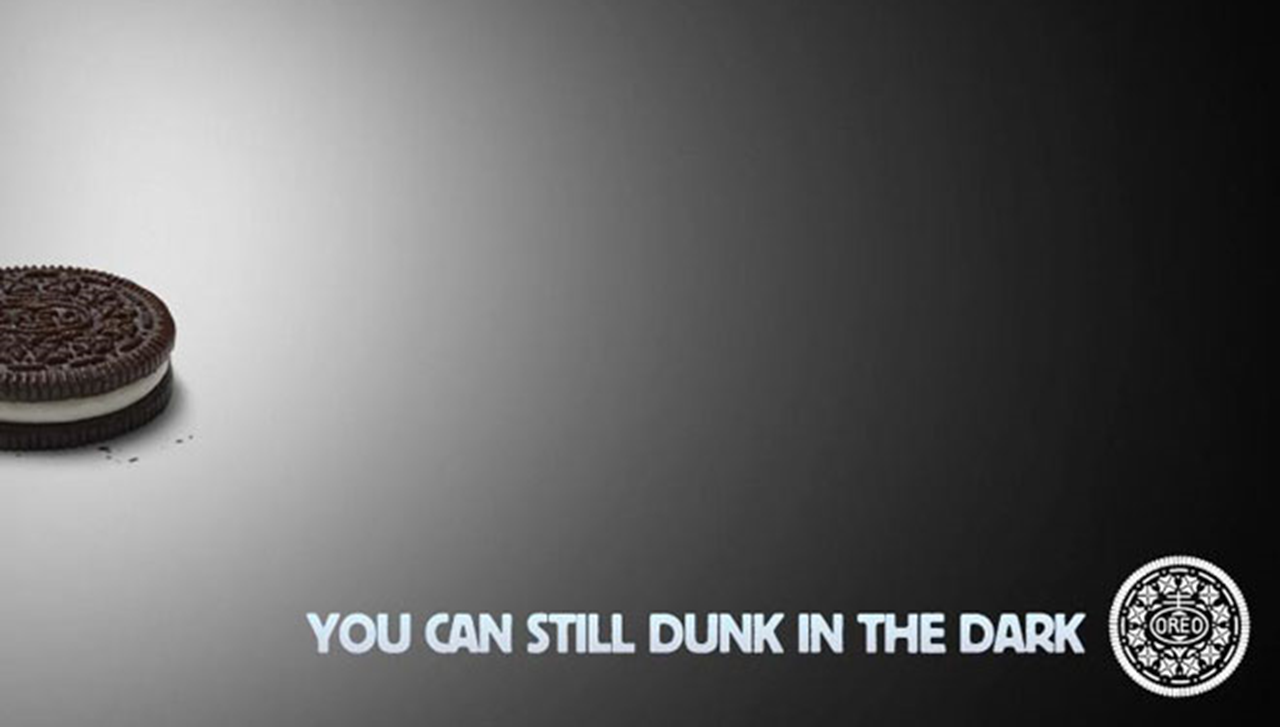 The message caught on almost immediately, receiving around 15,000 retweets and more than 20,000 likes on Facebook.

What is worth noting is that Oreo placed a team of 15 social media experts on-hand during the Super Bowl who were instructed to respond to whatever happened online in response to the event. From a prior survey, they were aware that approx. 36% of Super-Bowl viewers would be consulting a second screen during the event, and as a result of the black-out, possibly many more actually behaved in this way. So, yes they had invested heavily in this moment, and it tactically (and fortunately) paid off.

What is probably more useful to most people reading this article, is that Oreo, like the Royal Mail in a previous example, also did some planning ahead. In an event where there could be one of two eventual outcomes (a winner and a loser) they crafted two versions of their victory tweet in advance. Either through a diligent social media manager posting the tweet at the right time, or through a piece of software that can react accordingly within a few seconds of the result, real-time (or rather right-time) marketing could be a feasible strategy for many brands wanting to gain cultural relevance.

32% of time spent on devices is spent dual-screening while watching TV, with nearly half (48%) doing so during ad breaks.

With the Euros and Olympics coming up this year, it’s going to be another one of those years for brands to jump on the bandwagon. But beware, if you’re thinking of doing this make sure it’s relevant to your business and not a shameless ploy to achieve more visibility.

And possibly, if you haven’t thought about (or planned out) how it could work for your business this year, it may already be too late to take advantage. That being said, if you do strike it lucky, like KitKat & Felix, and something unexpected opens up an opportunity to seize the moment, and you truly understand your audience, your brand’s relationship with them, and your relevance to the moment that occurs then by all means go for it!

The dawn of a shift in consumer expectation?

Whilst it may seem that these examples are already dated and have been covered far too much in the media in recent years, I also made reference to Twitter and to the launch of its “Twitter Moments” section. Here is a brand which has been built on ‘real time’ conversations and statements, and yet we have had to wait until now for the business to offer something which is more in-tune with the phenomenon of macro-moments.

Twitter realised that whilst people turned to its platform for ‘breaking news’ unless they followed the accounts which broke the stories they would always hear about it via second/third/fourth sources. Twitter Moments was launched to provide the best of what was happening on Twitter, in an instant. Trending hashtags are now not the only way for people to get a sense of what is popular in the world. 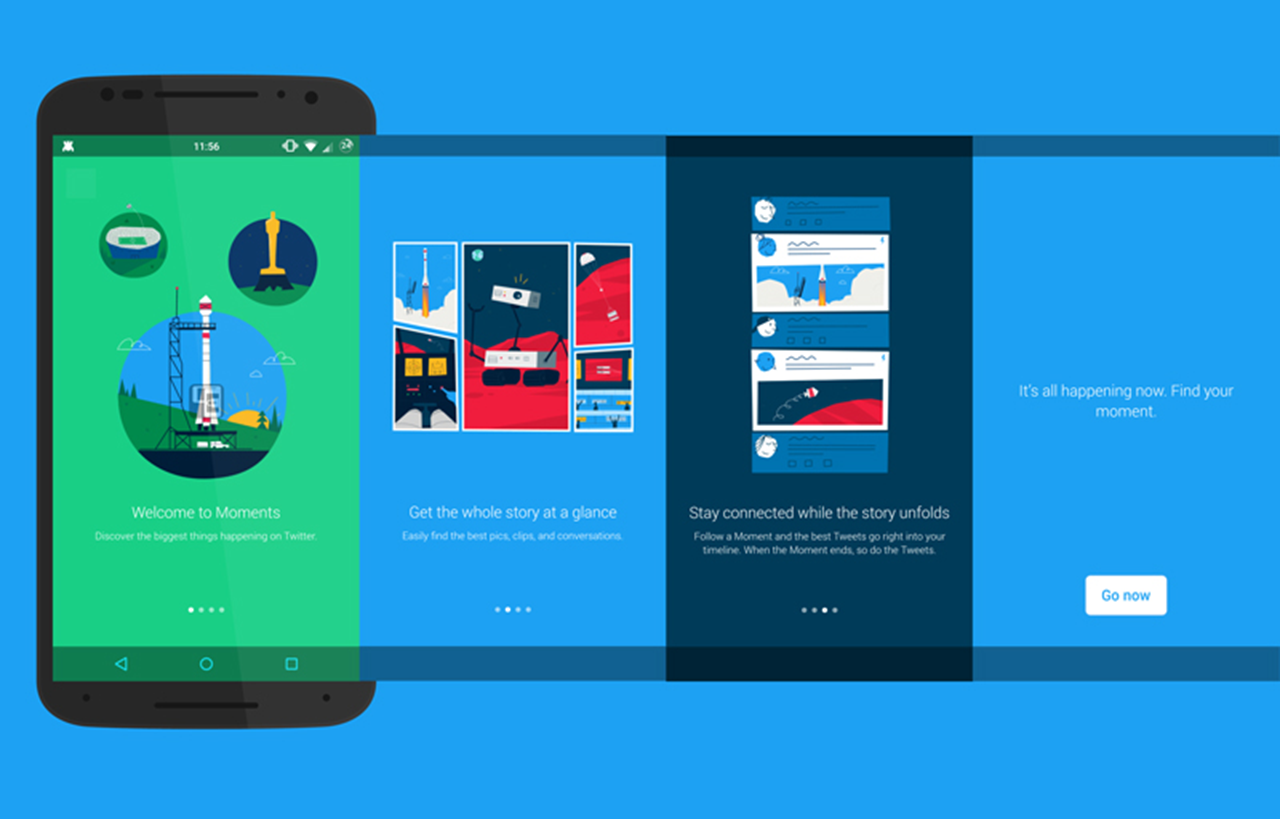 When organisations, like Twitter, which have a powerful influence over consumer behaviour, start to make significant changes to their products, you can rely on consumer expectations to change as a result. Let’s just hope brands don’t tastelessly jump on these bandwagons as a consequence of the proliferation of these moments.

After reading this you may consciously notice how many other brands are using “moments” in their advertising and marketing practices. I’m always keen to hear about any more recent great examples of macro-moment marketing in action so by all means tweet me @digikherrin with your recommendations.