On The Fifth Day Of Christmas Adido Gave That Me, Five Campaigns To Bring Us Glee...

A touching campaign from Canada's largest airline, Air Canada, struck gold in 2017 with the 'Gift of Home for the Holidays' campaign.

The campaign centred around the trend of 'giftvertising' as the company dropped in at the Maple Leaf pub in London, a watering hole extremely popular with London's Canadian community. At the pub, Air Canada offered everyone present a 'round', by which they meant a round trip home to Canada for the holidays.

Over 200 lucky Canadians were given this free gift with many confirming that a trip home to visit their loved ones for Christmas would not have been viable without Air Canada's generosity.

Silma Filali, the airline's Director of Marketing, commented on the campaign saying that "it wasn't about a big stunt that was surprising or just pulling at heartstrings. It had to be embedded into an insight everyone could connect with and it had to feel genuine for the Air Canada brand."

The campaign was largely supported through social media and PR, while the #ACgiftofhome hashtag was a huge success.

Although not strictly a consumer-focused campaign, Google's Santa Tracker is a hugely fun slice of pure genius.

Currently celebrating its 15th year, Santa Tracker and the accompanying Santa's Village is an educational playground for kids looking to learn more about basic coding skills, creating original artwork, brush up on their geographical knowledge, and learn about relevant charitable organisations.

It's also a fantastic educational tool for teachers who can download lesson plans aimed at teaching students basic coding skills and Christmas traditions from around the world.

Take a look for yourself, but be careful, it can be addictive, and no doubt you have work to do!

At a time of year where many of us enjoy a moderate tipple (or perhaps more!), Budweiser went against the grain with their 2017 Christmas campaign.

The American company chose to focus their Christmas marketing efforts on alcohol-free products for a Budweiser prohibition campaign.

The campaign was distributed across the UK in association with the Department for Transport's (DFT) Think! campaigns.

The thought-provoking campaign was distributed through out-of-home channels as well as online with the company also providing a multitude of vouchers made available for redemption in Tesco stores across the UK. 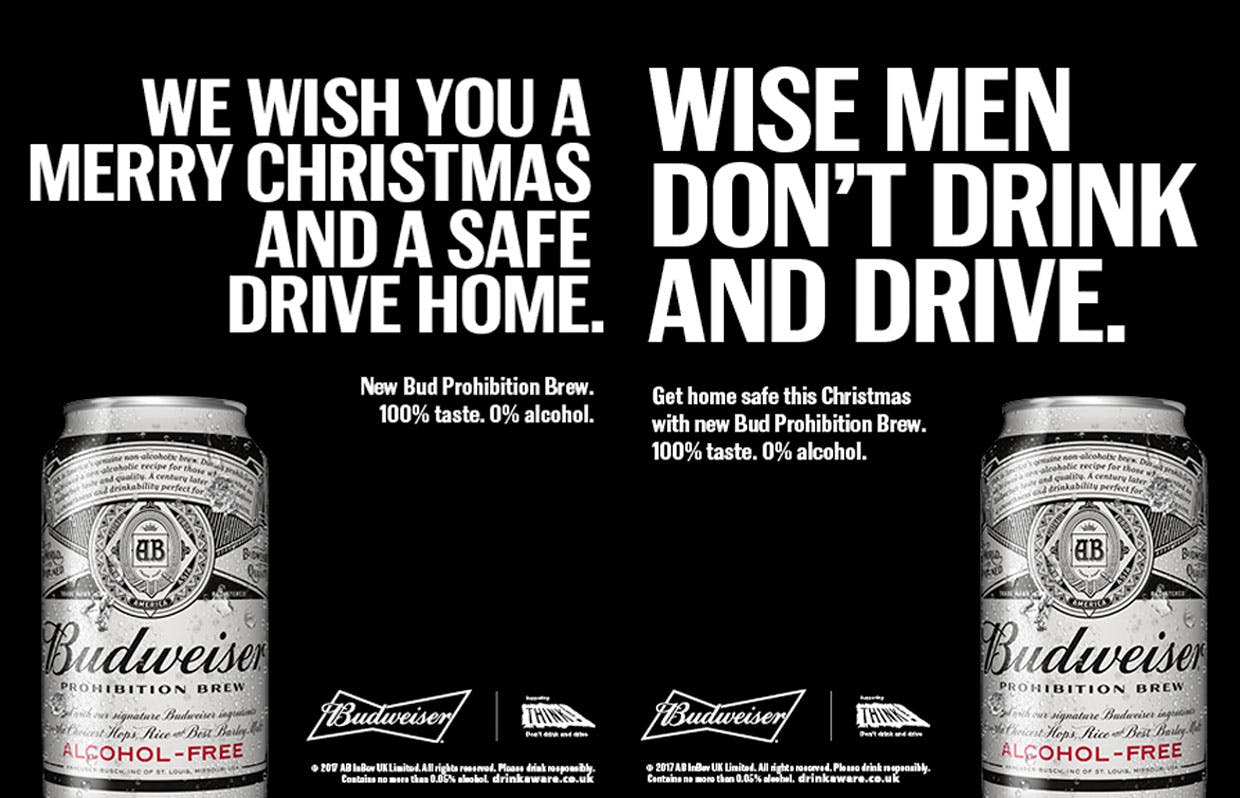 In 2013 WestJet, the Canadian airline launched a huge campaign spanning the Christmas period, to grant passengers their Christmas wishes through a live digital stream to Santa, before they boarded their flight.

Unbeknownst to the passengers (who believed it was just a fun game to talk to Father Christmas before they boarded!); during the flight, the staff at their destination quickly bought and wrapped the presents off their wish list like Santa’s Little Helpers! This was a heartwarming marketing campaign to watch as it showed how happy all the families were to be surprised at the other end of their flight. To be waiting for their luggage and everything they had asked for was waiting for them!

The campaign went viral across the internet generating a huge amount of publicity. On YouTube alone, they had over 47.9 million views… Twitter went crazy over the #westjetchristmas. Quite clearly, WestJet’s social media pros are experts in creating highly engaging content and integrated marketing campaigns. However, the success of the Westjet Christmas Miracle video must have far exceeded even their own expectations.

Winning a multitude of awards within the Travel and Tourism sector was yet a further indication that their campaign had delivered.

WestJet achieved a huge growth for brand awareness and loyalty opportunities from within and beyond North America. This is evidenced by the overwhelmingly positive reactions from the media, huge video views and amazing consumer feedback. Bringing them glee at a stressful time of the year!

Looking to something a bit more recent; this year, retailing giant Argos launched its #BookOfDreams campaign. The innovative campaign centres around a heartwarming television ad but what it's accompanied by is what's got the Adido team talking.

Alongside their traditional advert, Argos has created a repository featuring every single Christmas catalogue they've made, stretching all the way back to 1974. Yes, that's 45 whole years of Argos catalogues. SO. MUCH. NOSTALGIA.

This year marks the first time that Argos have put their catalogues front and centre of their marketing efforts for the first time in over a decade, and boy did they go to town with it.

The campaign has been met with delight from celebrities, influencers and members of the public reminiscing over their very own first book of dreams and sharing their highlights on social media.

Statistically, the website hosting this goldmine of retailing history received over 1.8 million visits within 24 hours of going live, and 9 million visits in the following ten days.

Perhaps it's a bit early to make such a bold statement, but we think that in Argos, we have an early contender for the best Christmas campaign of 2019.

Take a look for yourself at the simply glorious collection of vintage catalogues by clicking here.

ON THE FIFTH DAY OF CHRISTMAS, ADIDO GAVE TO ME:

FIVE CAMPAIGNS that BRING us GLEEEE,

AND A FESTIVE GUIDE TO PPC.

Marketing Attribution Models Masterclass: What They Are, How To Use Them, And The Models Available To You

Marketing attribution is the analytical practice of understanding which tactics are contributing to conversions. Armed with this data, marketers can make more informed decisions on how to assign budgets

A Match Made in Revenue Heaven. Introducing Your E-commerce Business To Amazon Ads

Amazon's ad business is booming, leverage their success to generate more revenue for your e-commerce business. Don't worry, you're not alone, we're here to help!

Creating an interface can take time for the user to learn. Couple this with guiding the user through that process without them losing interest and you're left with one of the most challenging briefs a UX designer can face.